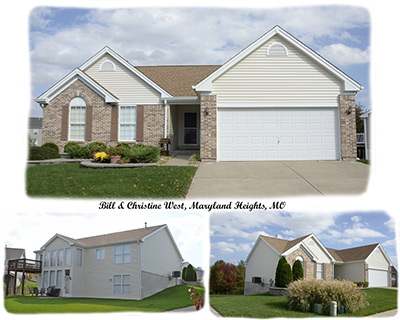 “Selecting a company to complete our siding job was a tough decision. We had several estimates and Lakeside’s estimate was priced significantly above the others. As we watched many different companies repair the siding on other houses in the neighborhood, we began to see the difference between the companies. Being somewhat of a perfectionist, I could tell I would not be happy with some of the other companies’ workmanship. I was given several home addresses that I could drive by to see the work completed by Lakeside. I did that, and was pleased with the work on those homes.

We selected Lakeside to do the work after Chad talked to us about our options and insurance estimates were completed. Chad was very professional, returning several times to answer additional questions, help with the matching of the color and meet with the insurance adjuster to help us match the estimate with the work that needed to be completed. This took almost 4 weeks (because of the insurance company, not Lakeside), and Chad was very patient and helpful throughout this process. Phone calls and emails were always returned immediately.

Both Chad and Eric discussed the job with us extensively, offering their professional advise about certain issues, and were willing to listen to our needs and desires and fulfill them as long as they were sound building decisions. Their number one focus was to satisfy the customer while providing the best service and workmanship.

Once the papers were signed, Eric ordered the needed materials and the work was scheduled. Another consideration for choosing Lakeside was their ability to meet a time frame that we requested. They were very punctual and worked very hard to keep their promise about starting and completion dates. Once again we were extremely satisfied. We were told that we would not need to be home to oversee the work, because they are known for their exceptional workmanship, quality and daily clean-up. I was leery at first, but now know that this claim to fame is definitely true. I would be more than trusting to hire them again, and allow them to work even if I was not able to be home to oversee the job. This alone was worth the extra price we paid.

Eugene and his nephew were our siding crew. Wow, I thought I was a perfectionist. I have never seen any work completed to such perfection! The original builders put the home wrap in certain areas only, like patchwork. In one area, they even had it on backward! Eugene and his nephew covered the house like it should be done, making sure all ends were taped securely so no water will ever enter it. They also replaced some of the boards on the house that needed to be replaced because of the original shoddy job. I never had to question any part of the job. They did the job right the first time. If a mistake was made, they caught it and fixed it immediately. The siding workmanship is definitely the BEST in the neighborhood! It looks much better than the original siding job completed by the builder!

Daily, the site was cleaned up before they left the property. All debris was secured into the dumpster on the driveway and all tools, etc. were locked into the trailer in front of the house. Nails and screws were also picked up daily. We were able to use one side of the garage for one car, and never had to worry about getting a flat tire. I mowed the grass two days after they completed the job, and never saw one nail or screw in the yard. The door that was replaced at the end of the siding job was also very high quality and installed to perfection! The installers were also top notch workers and very professional.

I can’t speak highly enough about the job Lakeside completed. Every step of the process went smoothly and we seemed to be the most satisfied customers in the neighborhood. We had several neighbors inquire about the company because they were also so impressed. We had friends in another neighborhood with nightmare stories about siding jobs. Others were extremely frustrated with the time it would take to complete the work and fix anything that they had to complain about. One person had to wait over 6 weeks to get a company to come back to repair something they had done incorrectly. At that time I realized, you definitely get what you pay for! The extra money was WELL WORTH IT!

I would definitely use Lakeside again for any work I may need in the future. They stand behind their lifetime warranty with a yearly visit to the home to check for anything that may need to be secured. The lien waivers were signed and given to us at the end of the job. Lakeside is a TOP NOTCH company. I have now experienced the difference between poor to average work done by the builder and exceptional work completed by Lakeside. They have increased the value of our most expensive asset, and for that we are thankful!”

SAVE BIG: Now through December 31st! Click to See Our Offers